“I’m not alright” – Rapper, Ikechukwu cries out on Instagram

Popular Nigerian rapper and actor, Ikechukwu Onunaku has taken to his Instagram page to raise alarm about his mental health.

The actor, who got married in May 2021, shared a post with “I’m not alright” boldly written on it on Thursday morning, November 17. However, he didn’t share more details about his condition.

He tagged music executives, Don Jazzy and Johnny Drille, to the post and wrote,

“Shey u wan know.
Oya na I don tell you

Moments after the public outcry, Ikechukwu said he received several DMs from people asking him to delete the post but he won’t take it down. 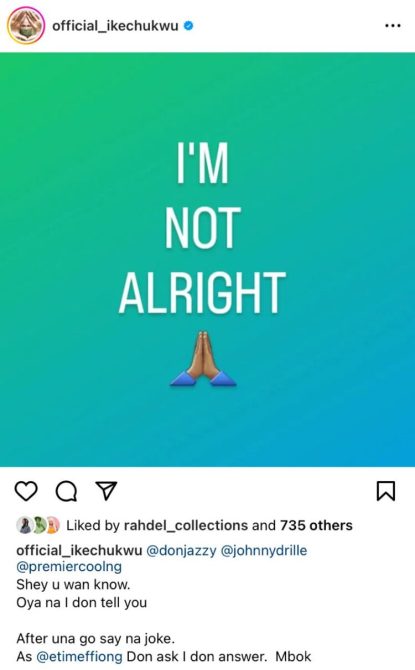 According to him, people claim to be interested in your wellbeing but in reality, they don’t care about you.

“Now if u know how many messages I have received telling me to delete , or stop putting private matters out there u go weak. Are u ok my friend? No don’t tell us o pls . Keep it tocurself”, he wrote in the comment section.

Meanwhile, his colleagues, fans and followers have flooded his comment section with reassuring messages, saying he is not alone in whatever he is going through at the moment.