#DavidoAT30 is one of the trending conversations on popular microblogging platform, Twitter as fans and colleagues have taken to their pages to celebrate with Davido who has taken a break from social media following the death of his son.

Recall that Davido who clocks 30-year-old today, November 21st, 2022 lost his son, Ifeanyi Adeleke on October 31st after he drowned at his Banana Island mansion

Just like others, 22-year-old Rema took to his official Twitter handle to pen a short note for the singer. His note was however interpreted by Davido’s fans as disrespectful.

Sharing a photo of himself and the singer, Rema tweeted; “Love you OG  @davido.”

However, fans trooped to the comment section of Rema’s post and served him some blasts over the way he addressed Davido on his birthday. 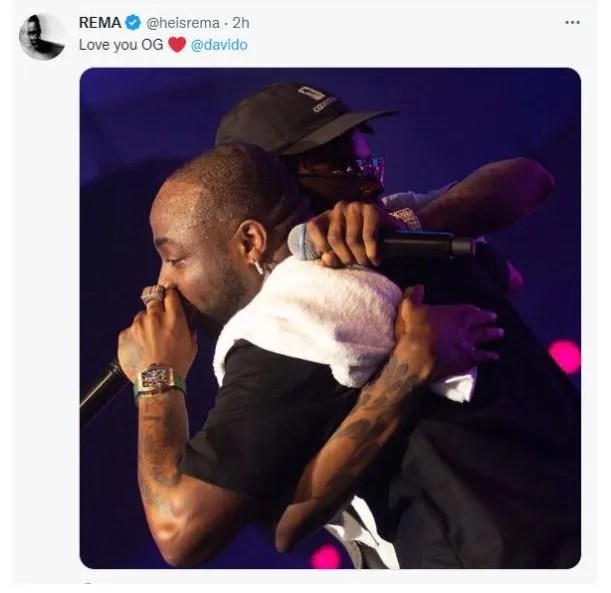 See also  My Brother’s Property: Davido’s Cousin Gushes As He Shares Video of Chioma Twerking During Her Birthday Party

@otunbaseafood: You no they fear, na 001 you they call og abi? Davido no be your mate oo.

@Meizz_glamour: So Davido na your OG now? Nawa o wetin his over familiarity go cause am ehn  .

@i_am_tobexbobo: Rema talk that thing again, you no know your mate?

@ridwan04142780:  Davido na your mate everyone is type king some say boss you said OG you’re too rud this boy REMA.

@Ejiro_OS: Divine, who be OG? No be small thing u take senior imade?

There’s no gain in having children — ...