Silekunola took to Instagram on Friday night to reveal she was honoured with a doctorate by Myles Leadership University. 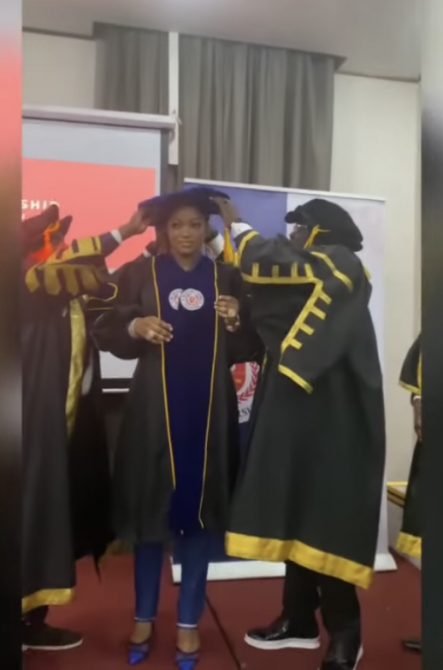 “A glorious night it is, for me and my loved ones. I’m excited to announce to you that another feather just got added to my crown. Today, I got conferred with the award of honourary Doctor of Philosophy (PhD) by the prestigious ‘Myles Leadership University’.”

Offering some advice for her followers, she said:

“While you walk through this world, please work hard. The heat will come but soon the honours will follow. The road may be bumpy but with prayers and consistency, the ride would eventually become smooth.

“Finally, brethren, after all is said and done ‘Will THERE BE ANY STARS IN YOUR CROWN WHEN AT EVENING THE SUN GOES DOWN?’”

Ooni married Silekunola in October 2018. But three years later, just before Christmas, she announced her separation from the Ooni.

According to her, she did not leave the monarch because of the other women in his life but because his public image was at variance with his real self.

Their union produced a son, Prince Tadenikawo, who celebrated his first birthday in November 2021 before Silekunola left the palace. She still uses the Ooni’s surname.