Hermes, who undoubtedly is on the list of favourite Level Up housemates, was captured alone in a corner of the house speaking out loud to no-one in particular with his eyes closed.

Some concerned social media users have expressed worry over his stability and mental health.

Reacting, some users alleged that he was displaying a ‘withdrawal symptom’ while another said his instability was as a result of too much Indian hemp in his system, however few others accused him of using it as a strategy to win the game. 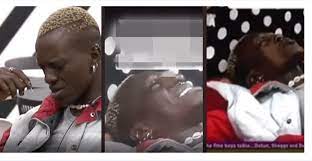