Family & SocietyGossipReligionTrendingUncategorized
Home›Family & Society›Pastor Adeboye Narrates Scary Encounter With Relatives, Reveals How He Ran For Is Life For For 13 Years

Pastor Adeboye Narrates Scary Encounter With Relatives, Reveals How He Ran For Is Life For For 13 Years

General overseer of the Redeemed Christian Church of God (RCCG), Enoch Adeboye has revealed that he ran away from his relatives for 13 years.

He made the disclosure this week at Port Harcourt’s Holy Ghost Rally.

Preaching about not “Knowing the potential of any man before the fire falls on him” , he disclosed that in the early 1960s, he ran away from Ifewara, then a village in Osun state, where he was born and raised because his father’s enemies threatened to kill him – an only son.

He said after 13 years in exile, during which he gave his life to Jesus Christ and was filled with the light that overpowers the forces of darkness, he went back to Ifewara, and nothing happened to him.

According to Pastor Enoch Adeboye:

“When fire comes in contact with wood, the wood becomes firewood. When the fire falls on you, the next time your enemies will see you coming, they will run for their lives.

“I ran for my life for 13 years when there was a misunderstanding between my father and his relations. They told my father that they will kill me in the following morning. I had no option than to run for my life.
“Now, whenever I want to go home and all the forces of darkness hear that I am, they run for their lives. This shall be someone’s testimony in Jesus name!” 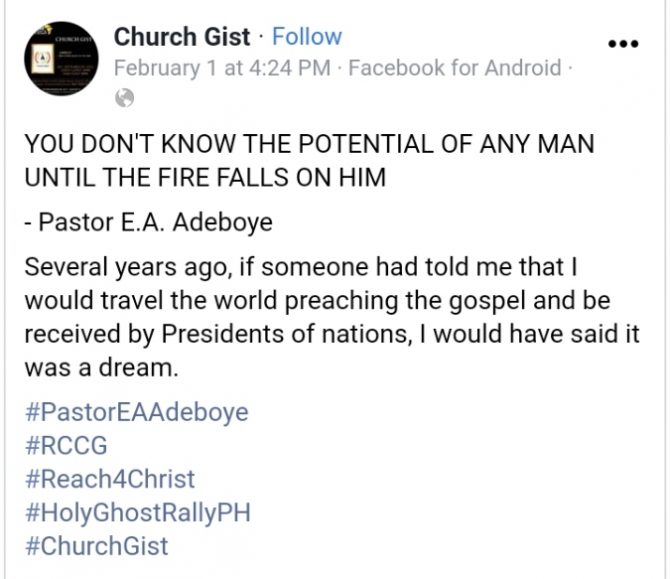 Sunday Igboho Will Be Released Soon – ...