Some People Will Be Happy When I Am Dead: Tiwa Savage Shares Troubling Post, Fans Raise Concern

Popular Nigerian music star, Tiwa Savage, has left a great number of fans worrying about her wellbeing after she posted a troubling message about her death. The music star who was recently enmeshed in social media scandal after a tape of her sleeping with an unknown man leaked online. Taking to her Instagram story, Tiwa who did not seem to be in a good place remembered her late father and her late ex-boyfriend, Obama DMW aka 44.

Top Nigerian music star, Tiwa Savage, has raised a lot of concern from fans after she shared a disturbing message on social media The mother of one spoke about her death and noted that some people will be happy when she is no more Tiwa Savage also remembered her late father and late ex-boyfriend, Obama DMW, in the troubling post

According to the Somebody’s Son crooner, she was sad about the demise of these two men. However, she sought comfort in knowing that they were no longer in this cruel world. She wrote: “I was sad at the passing of my dad and 44 but at least they are no longer in this cruel place.” Not stopping there, Tiwa Savage also spoke on her own death. According to her, some people would be pleased to know that she is no more. In her words: “Some people will be happy when I am no more.”

Tiwa Savage’s troubling post soon went viral on social media and numerous internet users had a lot to say about it. A great number of them showed concern about her wellbeing. 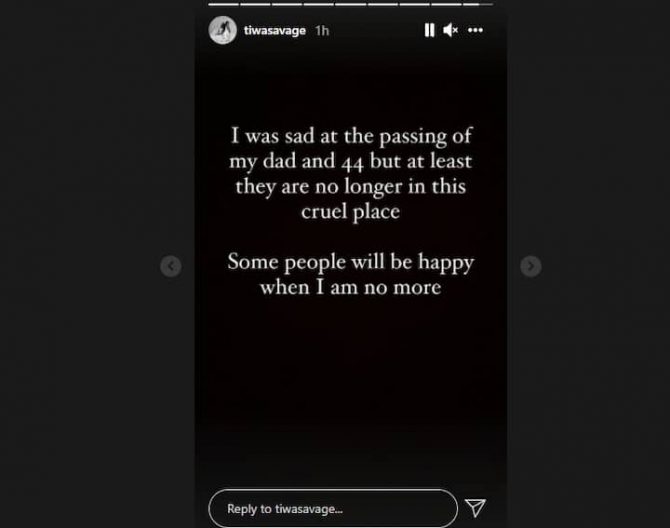 Tyson Fury’s Wife Hints When He Could ...

BBN Maria’s response to inquiries about her ...