Robert Lewandowski has received Germany’s Footballer of the Year award for the second season running after a record-breaking year, Newspremises reports. 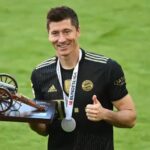 The Bayern Munich striker scored 41 goals in 29 appearances as his club were crowned Bundesliga champions again. He also broke the long-standing record by Gerd Muller for most goals in a single Bundesliga season.

Lewandowski beat his previous best of 34 goals in 31 appearances which was set during the 2019-20 season.

The club confirmed Lewandowski has won the award in a poll carried out by sports magazine Kicker in a vote by sports journalists.

The 32-year-old received a massive 356 of the 563 votes cast in the poll, putting him way in front of teammate Thomas Muller (41). Borussia Dortmund striker Erling Haaland came third in the poll with 38 votes after he scored an impressive 27 goals in 28 games.

Lewandowski told Bayern Munich’s official website: ‘I know what a great honour this is.

‘It’s a source of great pride and joy for me, because it’s rare for someone to win the title of Footballer of the Year in Germany twice in a row.’