Cavani is now under investigation for his post-match post which has been labelled racist. English FA has launched a probe into his post on Instagram after the player replied a fan with a word many tags as racist.

According to SunSport, a fan posted ‘Asi te queiro Matador’ in Spanish, which translates to: “I love you, Matador!”

Cavani replied on his Instagram story: “Gracias Negrito!” meaning “thanks little black man”!. It was gathered that the 33-year-old has immediately deleted the post on social media but the FA are already investigating the message and Canani could be suspended for at least three games. Cavani’s strike partner in the Uruguayan national team Luis Suarez had in 2011 received an eight-match ban after he used the ‘negrito’ word during a clash with Manchester United’s Patrice Evra in 2011. 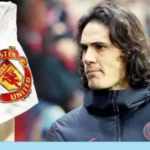 Edinson Cavani celebrated his goal for Manchester United at Southampton. Photo: Robin Jones Source: Getty Images But while Cavani did not join United until September, the clampdown applies to all players and United will fear the loss of their new strike star for the Christmas programme. Manchester United came back from two goals down to defeat Southampton 3-2 in a Premier League fixture played at St, Mary’s. A Bruno Fernandes strike and an Edison Cavani’s brace cancelled first-half goals from Jan Bednarek and James Ward-Prowse.

He has also influenced the UK government to make a U-turn as Prime Minister Boris Johnson agreed to fund an extra £400million of free school meals in November. The Red Devils star’s huge project is to ensure that vulnerable children are not allowed to go hungry on the account of COVID-19 – working closely alongside charity FareShare to help those in need.